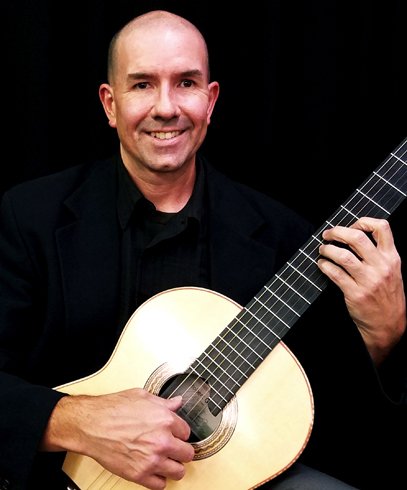 Scott Perry is an award-winning guitarist and composer distinguished through his broad and versatile music repertoire ranging from classical, flamenco, jazz, and pop to world-music and 21st century contemporary styles. He holds a M.A. in Music Composition from San Jose State University in San Jose, California, and a B.A. in Music Performance with concentrations in Music Composition/Theory and Guitar Studies from Appalachian State University in Boone, North Carolina. Scott actively supports the community through outreach programs and sits on the board of directors for the South Bay Guitar Society of San Jose, CA.

Scott has performed in large and small venues as both a solo artist and in groups playing on a variety of instruments such as the electric guitar, bass, drums, cello, Greek bouzouki, Afghan rubab, Egyptian oud, and Turkish saz. His primary instrument, however, is the solo classical guitar on which Scott explores its highly expressive qualities with rich and complex depth of tone colors.

Honors and awards Scott has received include the Will Hester Memorial Performance Scholarship (1999-2002) for intelligence, creativity, originality, and talent, the Eva Thompson Phillips Endowment (2004) for music composition, and 3rd prize at the 2020 San Francisco Bay International Guitar Competition.

As an educator, Scott brings all his experiences into music lessons with over 15 years of individual, group, and classroom experience at grade school and college levels. He encourages each student to explore everything that music has to offer while focusing on simply sounding great. Many of Scott’s students have earned degrees in music, are working in the music industry, and have used their experiences with Scott to help them attend universities such as Brown, Johns Hopkins, Mills College, UCLA, and UC Berkeley.